Star Wars is an epic saga of good versus evil, the triumph against all odds and the human spirit,or at least it was, until Disney came in and brought it down to mediocre.

This film though the sets looked like star wars, and the music was ok,(expected heaps more from Williams) no duel of fates epic goodness, it was average.

Disney fresh off their epic win with Frozen, again a rehash of an old fable, but excellently done, was not content with the billions they made from it, they had to stuff up star wars.

There was no imagination in storytelling here, just a copy paste of the original film.

Unbelievable, they could have gone anywhere with star wars, so they chose to add absolutely nothing.

BioWare’s Kotor or Knights of the Old Republic video game was amazing compared to this, rehashed tripe.

It even had an awesome plot twist just as in the original films, and would make an epic film, in true star wars fashion

They went on to make their own epic mythology Mass Effect

This film starts of with Lando junior suddenly forgetting his years of indoctrination, he soon meets, overrated space jock.

Then emo Vader spoils the party.

Athletic beautiful actress then joins the film and adds some substance.

The film has a feel that it was filmed in someone’s back yard and a warehouse, there was no exciting new worlds 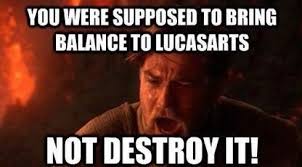 And the force, well no longer was it an energy, that binds shapes and touches trillions of beings in the universe, it’s basically limited to one family  as if was well you know, trademarked.

One thought on “star wars: the force gets trademarked”